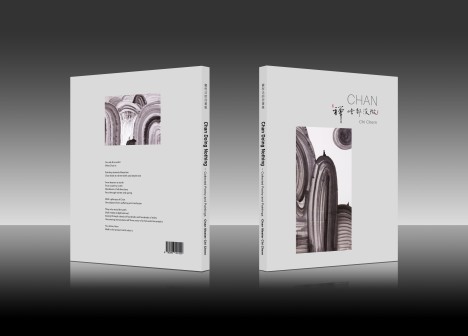 This collection of Master Chi Chern’s artwork contains paintings completed during his 2015 teaching tour in Europe and America. The poems are translated from his published and unpublished writings of the last five years.

There will be book signing by Master Chi Chern at the receptions of 「Chan Doing Nothing」 Painting Exhibition in San Francisco both on September 7th and 9th.

This is the second English translated book of Master Chi Chern. It is an lovely introduction to the course of seven-day retreat, including topics on Resolution, Motivation, Beginning of Retreat, Entering Meditation, Abiding in Meditation, Emerging from Meditation, Bowing and Prostration, Walking Meditation, Dynamic Practice, Relax in Practice, Individual Interview, Ending of Retreat.

There will be book signing by Master Chi Chern during his summer teaching tour in Europe and America. For teaching schedule, please visit ：www.masterchichern.org/retreats/

Chan has no gate.

However, to enter the gateless Chan, there are gateways to learning and practice.

If you have read or heard about Chan (Zen) retreats, and you are curious about what a silent meditation retreat might be like, this little book of introduction will walk you through a landscape of the meditation world where, eventually, you will find nothing except that your original self is immaculate.

Chan Master Chi Chern has been teaching meditation around the world and leading silent retreats in the Chinese Chan tradition for thirty years. People might think that his discourses would be like the lectures of a professor who can only speak to experienced practitioners or to Ph.D. students. But if you have the chance to meet him or ever sit in one of his classes or retreats, you will be pleasantly surprised to find that his profound teachings are delivered in an easy to understand manner that both long-time meditators and beginners greatly enjoy and benefit from.

In this collection of short writings, Master Chi Chern helps you to mentally prepare yourself for experiencing a seven-day intensive retreat. With a poetic style of friendly advice, he offers you encouragement and guidance as you are inspired to learn further and take on a meditation practice.

It might be important to note that Chinese Chan originated directly out of Buddhist practice taught by Shakyamuni more than twenty-five hundred years ago. However, to understand what is being taught in this book does not require commitment to practice in a certain Buddhist tradition — what is being offered here outlines some general disciplines that apply to any school or lineage of meditative practice.

Now, with this little book in hand, you have a sweet cookie that you have probably heard described in many ways. But remember — no matter how delicious it may be, you will not know its real taste unless you take a bite.

If you are ready to take the first step — Congratulations! The world of the meditation retreat with a mind of peace and clarity is wide open…

The Map to Nowhere

This volume not only contains the teachings on mind cultivation as a guide to Chan practitioners, but also includes sixteen selected recent Chan paintings by Master Chi Chern.

There will be book signing by Master Chi Chern during his summer teaching tour in Europe and America. For the teaching schedule, please visit ：www.masterchichern.org/retreats/ 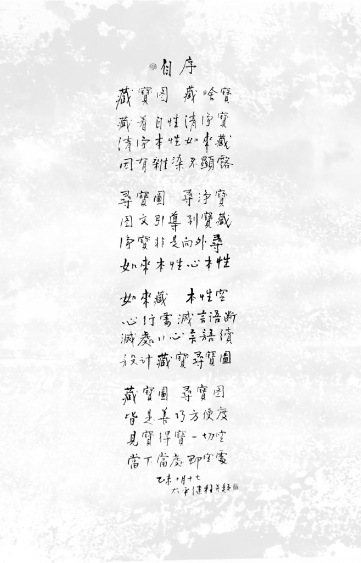 This is about an inward journey.

The destination is not out there.

What is being offered here is a map, which does not offer the kind of guidance that seasoned meditators might expect – it does not landmark various attractive locations nor charter the streets leading to the highly sought resorts. To serve these functions, there are already many manuals in the field on how to meditate or guidebooks for reaching samadhi or even enlightenment.

This book shares undecorated teachings in a relaxed chat-room, where sincere practitioners attend with their personal but commonly encountered obstacles during meditative practice, both on the cushion and in daily life.

Through the discourses given to participants in intensive Chan retreats, and with his years of Chan practice and teaching experience, Chan Master Chi Chern offers intimate guidance on your journey to nowhere other than to the immaculate self as it originally is.

To the Buddhist population in the East, Chi Chern Fashi (“fashi,” means Dharma master in Chinese) or Shifu as students in the East usually address him, is well known as a monk, teacher, and artist. It was not until 2008 that he began teaching in the West. Now Chan retreats led by Chi Chern Fashi are being offered in many countries and districts including Malaysia, Indonesia, Singapore, China, North America, Poland, England, Switzerland, Croatia, and Taiwan.

Chi Chern Fashi was born in Taiping, Malaysia, in 1955. He was ordained as a novice under the Very Venerable Zhu Mo (1913-2002) in Penang in 1978 and became a fully ordained bhikku the same year under Venerable Masters Yin Shun, Yan Pei, and Zhen Hua in Taiwan. After graduating from the Chinese Buddhism Research Institute of Fo Guang Shan in Taiwan in 1980, he learned Chinese Chan from Chan Master Sheng Yen (1930-2009) by participating in Master Sheng Yen’s four consecutive retreats in Taipei, during which his profound experience of “seeing the true nature” was confirmed and Master Sheng Yen gave him permission to teach meditation. Between 1982 and 1984, Chi Chern Fashi undertook a thousand-day solitary retreat in Malaysia. In 1985, Master Sheng Yen formally bestowed on him Dharma Transmission with the name “Transmitting the Exoteric, Seeing the Esoteric” (Chuan Xian Jian Mi). This made him the first Dharma heir of Master Sheng Yen in the Linji lineage of Chinese Chan and a fourth generation Dharma descendent of Master Xu Yun (Empty Cloud).

In addition to teaching in formal Chan retreats, Chi Chern Fashi also teaches through his artwork in Chinese calligraphy, Chan paintings, poetry, Buddhist lyrics, and also tea. He refers to himself as the “Idle Monk from Taiping” (his birth place and residence) even though in addition to several other teaching and mentoring roles, he has also been the Principal of the Malaysian Buddhist Institute, Vice President of Malaysian Buddhist Association, and Abbot of Puzhao Buddhist Vihara. He said with great humility in one newspaper article, “I am not a Chan master.” He lives a very simple and ordinary life indeed and is very approachable, almost instantly befriending anyone whom he meets – adults as well as children.

Why has this one book, among Chi Chern Fashi’s over sixty published books, been chosen to be the first publication in English? This book includes discourses given in Malaysia in 1999 during two intensive Chan retreats, prior to which all participants had learned the forms and basics of sitting meditation and had experienced intensive retreats. These discourses cover his essential Chan teachings with detailed explanations concerning typical issues that many meditation practitioners encounter; they also cover instructions on how to deal with obstacles to practice, both in and out of the retreat environment. Therefore, this book serves as an excellent introductory of his teachings to the practitioners in the West. It is best read as if one is attending a full seven-day retreat and is having several individual consultation sessions with the teacher. Some of part I and part II cover similar topics since they are given in two separate retreats to different groups. Readers will find fresh approaches in each that the Master takes in order to meet the conditions and needs of various groups of participants.

To readers who are not yet familiar with Chinese Chan, particularly with the lineage of Master Sheng Yen, the frequently used word “method” throughout this book refers to the particular “method” or the “technique” which a practitioner finds helpful to practice in meditation, such as “counting breath,” “asking the huatou,” “reciting the name of the Buddha,” etc. When the Master speaks about “returning to the method,” it does not mean that there is “one” method that everyone employs in the retreat; instead, it is the particular method each participant practices currently. With this understanding, any method that assists in reaching stability and calmness of body and mind in order to achieve awareness and clarity is “the method” referred in the discourses.

The teachings in this book were given orally in the Chan hall and transcribed by students from audio recordings. After “direct” translations were completed in staying loyal to the original words of the Master, some editing was done with the intention of making the written presentation more compact or a bit clearer to audiences in the West. Although the translator has studied and lived in the United States for many years, the English rendered in this translation work is far from perfect. For this, the translator sincerely hopes that any barrier to the teachings caused by the translation or editing can be forgiven and overcome.

Among the many analogies employed in the teachings of Chi Chern Fashi, the “climbing the mountain” analogy vividly and best describes the complete journey of Chan practice or enlightenment. Whether you are on your way or have just arrived at the foot of the mountain, regardless of whether you are resting during the hike or heading towards the summit, the simple and clear, yet detailed and profound, teachings in these discourses offer guidance on establishing a solid foundation in Chan practice. As Chi Chern Fashi has pointed out, “nowhere” is “now-here” – the present moment! So now, the rest of the journey is up to you!

Before concluding this brief introduction, as the translator and editor, I wish to thank a group of volunteers who have assisted in the completion and publishing of this book – Nancy Townsend and Mary Gray for diligent assistance in English review and suggestions for editing; Buffe Laffey for lending her professional expertise in thorough editorial reviews; Xing Chen and De-Hua Zhang for assistance in cover designing; Yong Mo, Bo Feng, and Ting Ting Li for layout; Zhao-Qun He for matting work of all the artwork used in this book, and Paul Bridenbaugh for photo enhancement on the author image. I am very grateful to Reverend Kinrei Bassis and his congregation for their continued friendship and support – it was at their temple that I had focused time and quiet space to complete the majority of the work for this project. Also, many thanks go to Elan Wang and Yawen Hsu for their administrative assistance.

Words cannot sufficiently express my deep gratitude to Shifu – my teacher and mentor Master Chi Chern – for his profound yet down-to-earth teachings and his great compassion in guiding me through my study, practice, and global travel with him. This book is humbly dedicated to Shifu in the sixtieth year of his life on earth for celebrating his thirty-five years of Chan teaching around the world.